Not quite. It's been 11 days since I kicked off my efforts to make Guess That Fart a smashing success. My goals were to have at least 100 reviews and at least 5000 installs, and for Guess That Fart to be the top result when you search "guess that fart" in the Google Play store. Barring some unexpected pushes at the eleventh hour, I won't be reaching those marks.

Guess That Fart currently stands at 11 reviews (an increase of two) and over 100 installs (increase of 90+). It's roughly two-thirds closer to the top of the search results (the order seems to vary by user according to behavior so just eye-balling this for now), but it's still not on the first page of results. I have tried a smattering of different approaches with varying degrees of success and expense, but unfortunately none have gotten the desired results. This is a bit discouraging, and increases some concern that maybe people will just not like the game. But the positives are that I am certainly learning a lot from this experience, and there have been zero negative reviews (note however, that there have still been zero reviews total from people I do not know). The minimal amount of bugs in the game and its overall polish are probably factors in the lack of negative reviews.

Now let's go over what I did.

AppLovin didn't really seem to pay attention to the target cost-per-install (CPI) of $0.70 that I had. It also did not properly track installs (I contacted them and they are working on the issue*), so I have to estimate based on the install data from Google Play Console. Those aren't deal-breakers for me though. I do wonder however if changing the target CPI would affect the cost and number of advertisements served. This is something I will test next time.

*Update 3/22/16 - It turns out that the reason the AppLovin installs weren't being tracked is because I missed something in my implementation... whoops. This would also explain why the target CPI is off. Their customer service has been great and I'm eager to see how the next campaign goes.

Since I don't have a video preview on Google Play, AppLovin automatically generated an amusing video to be served for video advertisements. I rolled with it for two days but it was clearly evident that the full-screen interstitials were much more cost-effective. The videos had an average click-through rate (CTR) of 12.6% while the interstitials had a CTR of 16.2%, and the videos cost a lot more per impression. If we look at just the interstitials and split installs according to number of clicks (I know this may not be entirely accurate, but without install numbers it seems appropriate), the interstitials have an estimated cost-per-install of $3.32.

One other interesting tidbit: these ads were served to the US, Canada, Bermuda, and Greenland. Greenland had a CTR of 27%! It had a much smaller portion of ads served to it though, so who knows if that stat would hold up with more data. 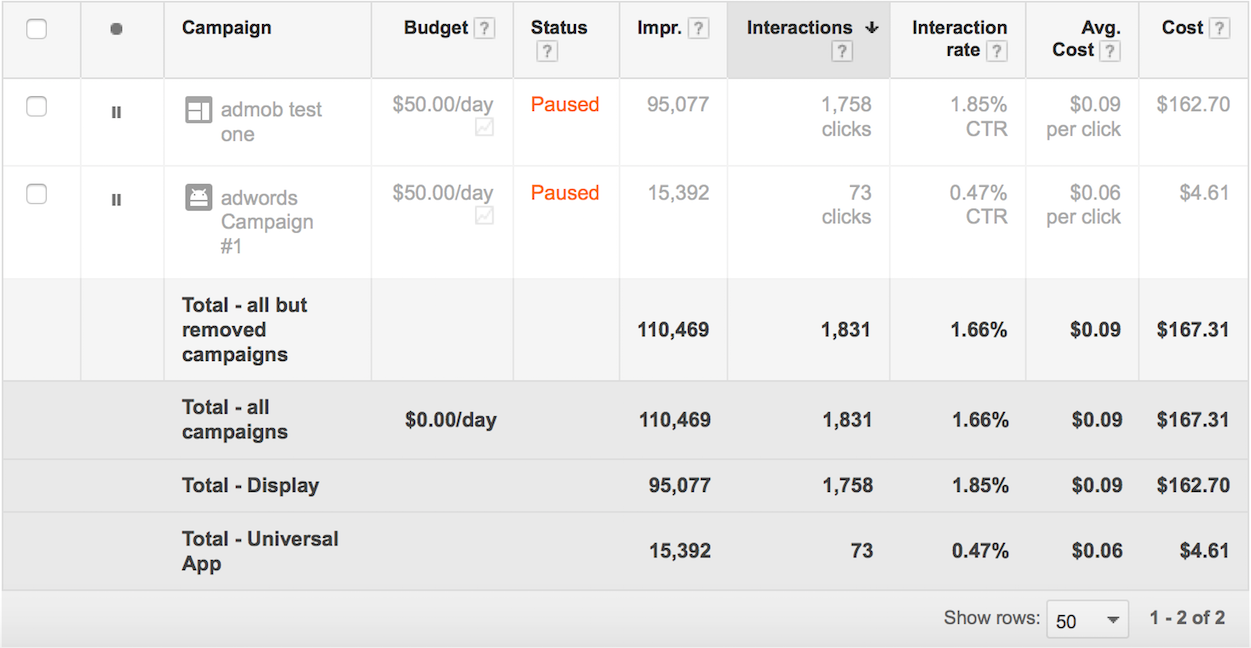 I started out with AdWords, but the number of ads served were really low, even after changing the target CPI to $2. That netted only 4 conversions but it was dirt-cheap at $4.61. It seems to respect the target CPI quite well. I will probably continue this but the main negative is that impressions (and installs) are slow to trickle in.

Then I found AdMob, which is similar to AdWords but specifically for mobile. I think that AdMob ads are only served by other apps which integrate it, which makes it pretty similar to AppLovin. For AdMob I created a banner ad and a full-screen interstitial. The average CPI was $2.96 which was cheaper than AppLovin although likely still not very good long-term for this app. What's interesting is that the CTR was significantly lower with AdMob but the cost per impression was also significantly lower so it balances out. One possible contributing factor could be that I had to make my own interstitial ad for AdMob. I'm just now wondering if I should indicate that the ad is for an Android app... I'll do that for the next go-round. 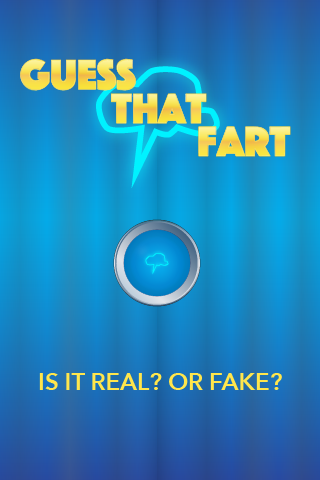 Total Spend: around $20
Number of Installs: less than 5
Estimated Cost-Per-Install: $5 if not more
Would I do it again?: maybe 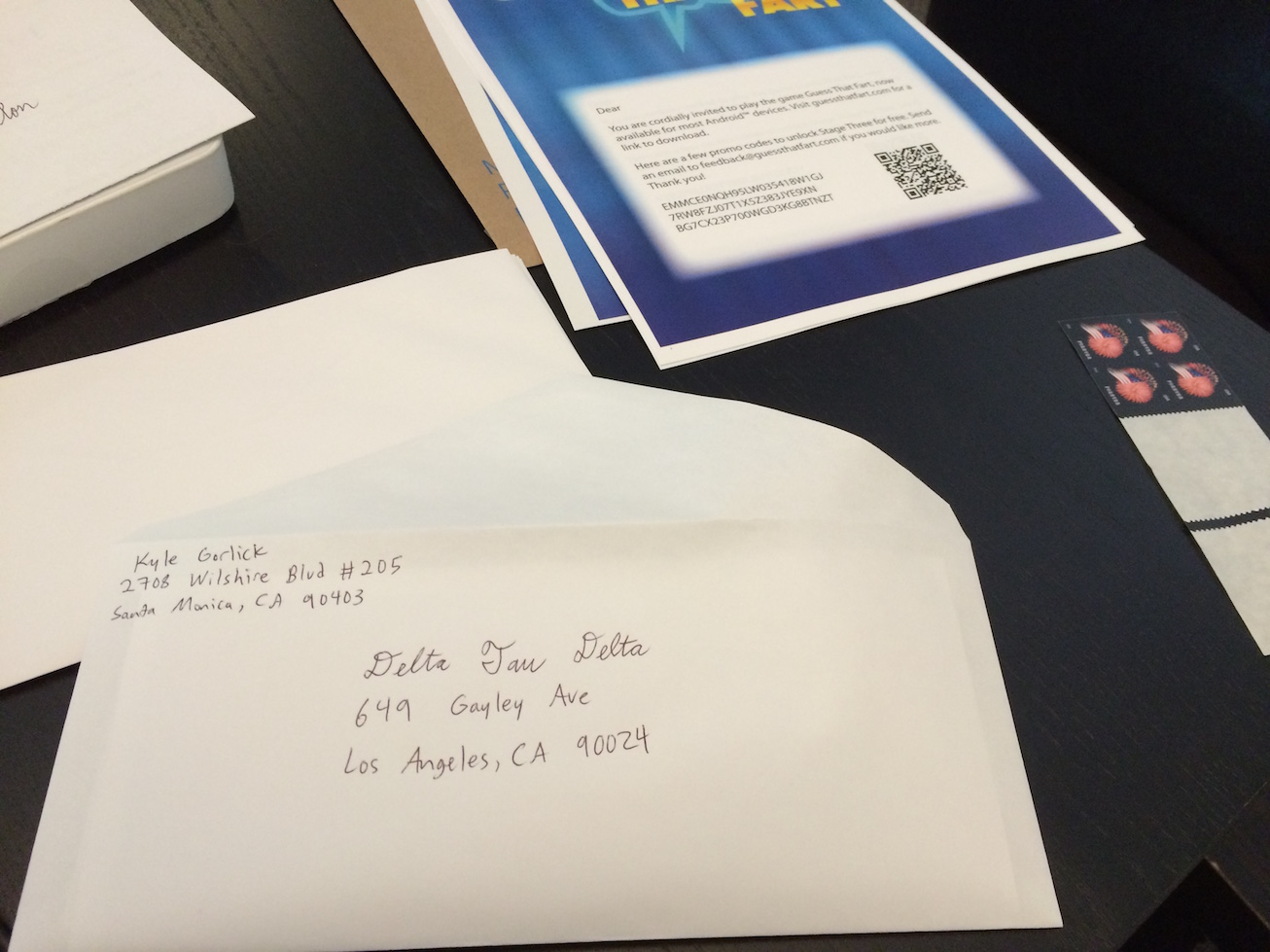 This one was fun and a nice break from computer screens, though probably not that effective. I created flyers with promotion codes for 13 UCLA fraternities and mailed the flyers to each house. Unfortunately I have no good way to tell if the envelopes were even opened, let alone if anyone did anything after that. I probably should have a used a special tracking link in the QR code but I didn't think it was worth the effort... does anyone actually scan QR codes? But looking at the number of installs around the time the letters should have been received, this strategy likely resulted in no more than a few installs, if any.

I also considered creating goodie bags with whoopie cushions and other items, but decided that it would probably not be worth the cost.

Total Spend: around $40
Number of Installs: less than 5
Estimated Cost-Per-Install: $8
Would I do it again?: probably not, at least for this app

I stumbled across this option and decided why not try it out. It got a lot of impressions but didn't seem to resonate with those snarky reddit users. Who makes this shit, super_franzs? I make this shit.

Paid A Couple Review Sites To Review The Game

I found several websites that offer (hopefully) unbiased reviews of mobile apps for a fee. I decided to go with two for now (The Smartphone App Review and Android Apps Review), one of which includes a video review. They haven't completed the reviews yet, so it remains to be seen what the results will be. I am excited to see what they say though... if both reviews are really negative, then maybe it's time to consider moving on from Guess That Fart.

This was fun. I had the idea a while ago but just recently decided to actually go through with it. I get the feeling that for this to possibly go viral (for me, that means a quick spike in views, preferably resulting in over 100,000 views) it may require some marketing effort. If it's even a good enough video for that. I have some ideas but have to decide what might be worth the time.

So in total, I've spent about $700 and roughly a week's worth of work on this. I've made $4.12, all through in-game ads. In addition to getting more installs, I've got some work to do to find out how to make more money per user if this can possibly be a profitable venture.